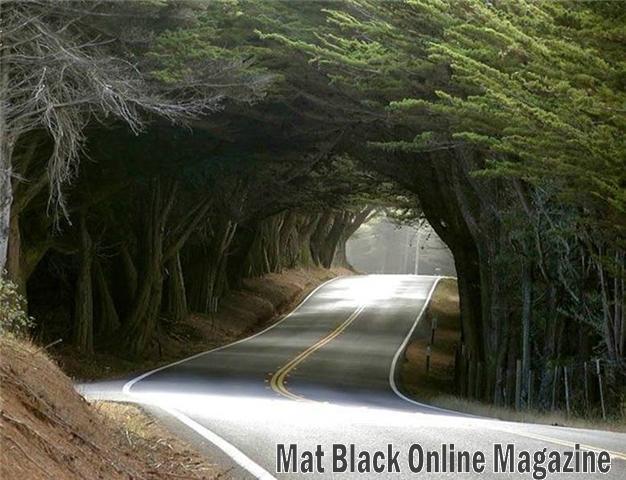 "Don't use the phone. People are never ready to answer it. Use poetry." -Jack Kerouac


MAT BLACK ONLINE MAGAZINE
(June 2011)
Poetry
Abby LeCavalier
The Simple Life
Cut in two pieces,
she wears razorblades
around her neck
and wrists.
A not so subtle warning.
Bewildered;
the crying stopped
long ago,
but the screaming
never did.
And she holds the world
accountable,
spitting through the syllables
of simple conversation.
Though that’s exactly what it’s not.
Moving the air in and out
with velocity
and momentum,
shouting fire
without the heat,
without the heart.
Impatient,
she breaks.
And there is no one left
to put her back together,
again
and again.

Tyler Gobble
Tyler Gobble is lead editor of Stoked Journal, blog editor of The Collagist, and a contributor at Vouched Books. His poems have appeared or are forthcoming from PANK, Metazen, Everyday Genius, and Used Furniture Review, among other places. Find him online at his blog xforwardprogressx.blogspot.com
The Decline

They say, recent times haven't been kind
to the American pick-pocketer. Sure,
and the subliminal is losing its touch,
like showing our children the difference
between right and wrong with pictures
of boys kissing boys has stopped working.
Nothing has disappeared as dramatically
as pickpocketing in the biggest cities,
The Decline putting our best hands
in the wrong places amongst the justice
system. They say, "It's a very human crime”
and sure, I bet it is, takes the swift violation
of personal space, like those do-gooders on TV
who won’t fix your house without a big hug
and you crying on camera.You have to wait
for the proper mark. Do you believe them
that “No one teaches it anymore” about how
it’s more than gone, out of style, the way
my grandparents feared homosexuality
would phase out marriage? Yeah, I get it,
that feeling like being stuck in the revolving door
at Macy's. The myth of America as the place
to be safe-pocketed or free is dismantled again.
Proof: My dad spent years convincing me I loved
girls, slapping my wrists up as they hung limp
in pre-pubescent uncontrollable bodyness.
I only have two hands. This is me using them
to do something other than shield my eyes
or cover my butt.
Corey Cook


Corey Cook's second chapbook, What to Do with a Dying Parakeet, was released by Pudding House Publications in 2009. His work has appeared in The Aurorean, Ballard Street Poetry Journal, Brevities, Chiron Review, Floyd County Moonshine, The Henniker Review, Ibbetson Street, Northern New England Review, Pearl, Plain Spoke, Willard and Maple and many others. He edits The Orange Room Review with his wife, Rachael. They live in New Hampshire with their two daughters.

The rough wooden bowl on the table suddenly
reminds you of those cupped hands
you brush by every day, your
wallet thick with bills,
your pocket heavy
with change.

Fiction
Angela Spires
Angela Spires is a graduate student at the University of Nevada, Reno where she is pursuing a masters degree in English Writing. She teaches English composition and runs a creative writing club on campus. She is originally from southern Virginia where she was was a journalist for seven years, before switching to fiction writing. Her fiction has been published in The Brushfire as well as The Stethoscope.
Shelving Units
I appreciate three things in life: reading, writing, and woodworking. There once were others, but I cannot recall them.
Not just any writing, either: poetry. I am a poet and a craftsman. Many have laughed at the notion. I wonder if they think it too hard to believe that someone can have rough hands and an elegant mind. But I see the beauty in both as similar as any two creations can be. The precision of the lines, the fluidity of the piece, the way it captures the eye. The way it makes you feel. The way it can be timeless.
I live in a two bedroom house, which is small, but came with twelve acres of land, surrounded by forest, and a garage that has never housed a car, but makes a wonderful work station and storage room for boxes of books and a small, red wagon that used to belong.
I used to sell my wood pieces in town and stop for groceries and supplies. But I don’t need much in the way of food. I have only myself to feed. I don’t think it was always this way, but it is now.
My books are delivered a few times a week. Sometimes I want them sooner and I have to wait to begin the next one. Then I write or work. But when they arrive I halt to open the cover to the first crisp page and smell the paper. I could inhale it forever.
The books have begun to pile up, and now I need somewhere to put them. I need shelves. I might build the shelves in the second bedroom, but when I open the door with the faded name on the front and stare at the blue walls, I can’t.  There used to be more in the room, maybe a twin bed, a dresser. But now, only blue walls. I can’t build the shelves here. I close the door and start in the living room.
I build them directly onto the walls, cutting out spaces for the television that I rarely watch and the cable box that I am not sure why I still pay for. I build the shelves until they cover the entire back wall of the living room. Then I start on the side wall.
I fill each shelf I build with my books. They are not in order. I want to look through them and randomly stumble upon something that I had forgotten I had. Something that evokes excitement to read again. I fill the first set of shelves with my books, but there are more. Boxes of books. Books arriving every week. I need more shelves.
I open a new box. I pick up a book—Where the Wild Things Are—but do not want to read it. It belongs on a shelf, but not here. I need a better spot for these books. For now, they will remain in the box.
I finish the second wall. The third. All of the walls in the living room are now covered in shelving. It is not enough. I still need more shelves. I begin to build them down the hall. When I reach the door to the blue room, I think I hear a small, familiar voice inside calling me a name that no longer belongs to me. I open the door, but the room is vacant. I close the door and hammer in the first nail. Soon the door is covered with shelves, followed by the rest of its side of the hall.
The hall is smaller now and harder to walk through, but now I am surrounded by the things I love. But what of my poetry? I cannot bring myself to read it. It speaks of loves I cannot recall. I build frames for each poem and mount each down the other side of the hall. I mount them in my room. I mount them in the bathroom and the kitchen.
But don’t I still have so much more to say?
It seems the old words have gone. Perhaps they are trapped in the blue room. Perhaps they are in the last box of old books that I have not unpacked.
So I unpack it, placing them in front of the blue room door, across from the poetry that speaks to what I cannot recall. I know I will not ever read them. They are not mine. They are not for me. But they are part of my collection nonetheless. This is where they belong.
Then the words return to me, and I cannot stop the pen on the paper. I scratch out and rewrite. The words are darker now. Not me. They are not pristine and perfect on the page. The lines are crooked. All wrong.
More books arrive. I have nowhere to put them. More words come out, and I have nowhere to hang them.
They are trying to remind me of something. Something I cannot recall.
I build shelves across my front door. I place the books on the top and the bottom. I place the new words in the middle for the best view. I know they are speaking to me.
But the shelves are slanted, imperfect. How could I have created such flawed pieces? Flawed, like the new words in the middle.
They are not like the books in the hall or the words on that wall. They are not like the blue room. Something is missing.
If I stare at it long enough, I just might recall.

The Thing About May Is...

With our school semester ending and snow falling, we at Mat Black told May to fuck off and be better next year.  WE WILL be publishing a June issue and so on.  Thanks for your time everybody and we hope you are enjoying what we are bringing to your eyes.

Mat Black Online Magazine is an up and coming opportunity for writers to be heard. The editors at MBOM are very excited to get the ball rolling.  Our goal is post monthly issues of MBOM that will feature both poetry and fiction.  Occasionally, we may post an update that our magazine will be switching to a quarterly format if necessary.

Each issue will have open topics for you to write about anything, but if we get bored, or a little drunk, you may see a post with a specific topic for an upcoming issue.

Please reference our submission guidelines as we will dismiss any submission that doesn't meet our specific protocol.